Most of the week, the heat was oppressive until the evening which gave us warm nights, superb for sleeping under the stars
The wind was barely there except for a Tuesday dust storm that brought kilos of dust on everyone
The kindness and smiles on all faces for most of the week
All the camp designers super excited to talk about minute details of their camps, priceless
A washboard "axle-killer" exodus road on Tuesday post-burn
Bikes as MOOP
One unstable burner changed the nature of burns to come
The Tree of Ténéré, The Temple, Incendia dome at night, Ilumina, Rabid Transit (with soundtrack), Abraxas Thursday morning, Solipmission (the black cube), The Glorious Gastronomic Galactic Griddle for random playa dinners, Sextant (Torrey), the fireworks for Man's burn, the tears of joy being able to live these precious moments.


For urban grid lovers and camps layout designers
check out this high resolution GigaPan view of BRC made by photographer
Todd Huffman, a must-see to find your camp and understand how the city works. 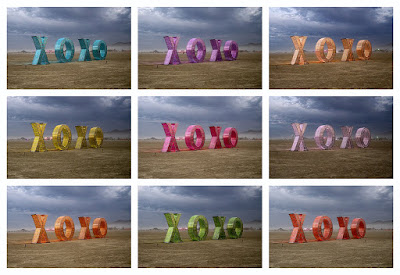 This blog was created to inspire and grow
a community of like-minded participants building a functioning city
in an inhospitable environment while having fun, mostly.

Over the last 10 years, thousands of images of camps, structures,
along with hundreds of reliable links have been featured.

The Golden Rebar Award was created to highlight the innovative
or most surprising shelters that I considered as important
as the various art installations all along the playa.

The logic was to make a book.
2 years were spent on  Research / Writing / Editing / Design and Layout (which paid off with a 2017 Graphic Design Award) / Production and Problem Solving /
The result was a burner worthy book with a tactile cloth cover and blind embossing, packed with info, data, tips and, most of all, a very large visual spectrum of our vernacular architecture. 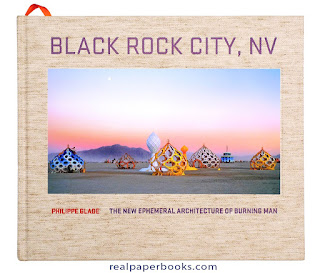 One year was spent on a worldwide promotional campaign with stellar results: features on CNN, Wired, Wallpaper (of all!!), Architectural Digest and more.


Without further ado I am pleased to bring you, again, a visual overload
of the many faces of my / yours / our city with 300+ images

Due to the ever-changing nature of the city and its large area, it is impossible to capture all the interesting and new structures that were in the desert, I am sorry if I missed your dwelling, nothing works has planned: c'est la vie! 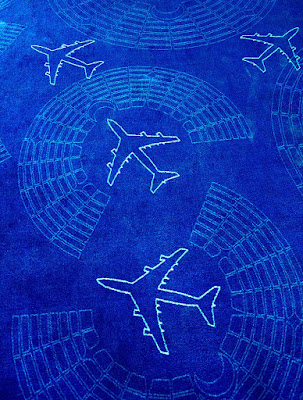 For the previous years, I let you find out how to get there.

For a slideshow experience with higher resolution
double-click any image

Golden Rebar for keeping up
with Buckminster Fuller 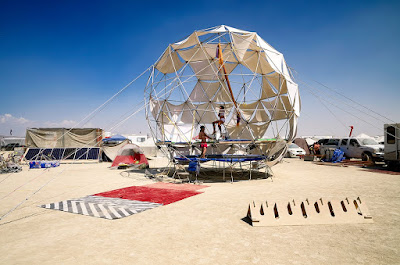 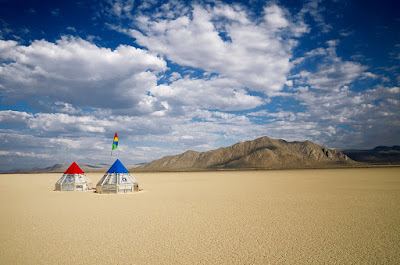 Serene is the least word you would associate Black Rock City with.
Weathered burners know this place, so I will not mention it in a vain attempt to keep it as is,
an oasis of silence
Octayurts in the Mindfield
Sometimes there is a fine line between an art installation and a camp

There goes the Neighborhood Golden Rebar 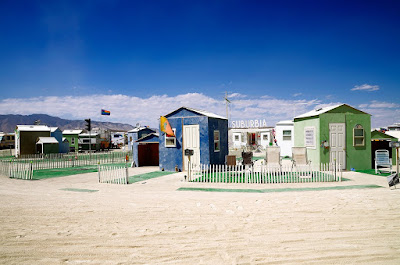 
Golden Rebar for Zipping around the Box 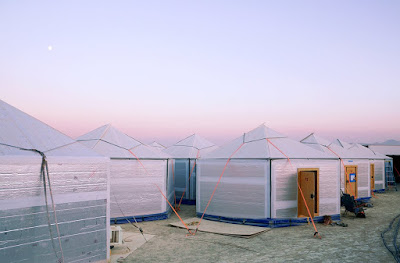 David Braun, lead and designer of camp Naked Heart Camp,
tired of using year after year expensive bi-directional tape to slowly assemble hexayurts,
came up with an innovative way to accelerate the building process.
He connects the insulation panels with zippers pasted
with insignia cloth, an adhesive backed cloth used
for emergency sail repair, and sets up the yurt in 7mn
Although expensive at first, this investment can be recuperate
(hopefully) with several years of usage. 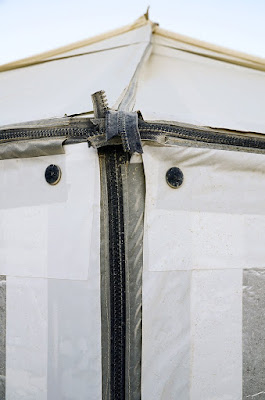 Golden Rebar for Upping the Ante 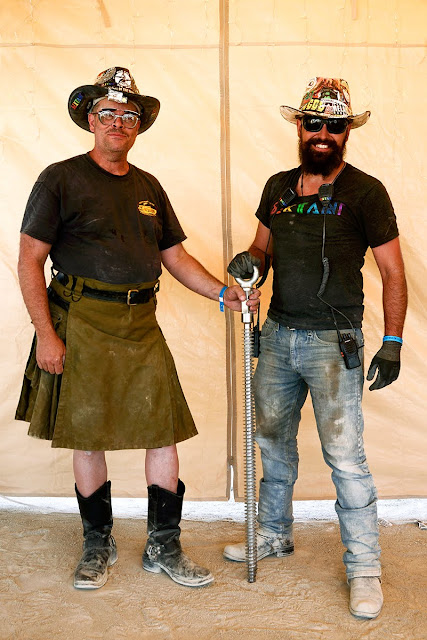 
When you have a 1200' long Zipline at the top of a 75-foot tower (with a bar for 10 intrepid burners) on top of a 27-foot dome facing giant 4 Million Volt twin Tesla Coils, you need some heavy-duty anchorage.

In their non-stop journey for pushing the envelope of extreme fun
while complying with the highest standard of security,
James Erd and Torrey Smith are testing diverse screw anchors.

So far, they are successfully using the PE-26 Penetrator that has a limited lifespan before failing in shear during multiple installations and removals.

They took matter into their own hands to manufacture an Earth anchor that has an unlimited lifespan and can be easily installed with handheld impact wrenches.
The Penetrator is a 1.75" x 36" 17-4 Stainless Steel screw
machined by James in the Sextant shop at m0xy Oakland
on a Monarch 61 lathe.
17-4 Stainless Steel is many times stronger than the 304 Stainless in a fork. It is used in Aircraft landing gear and Medical Devices. 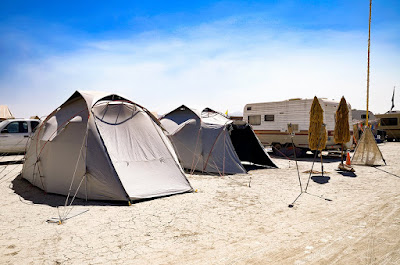 Once again lost in the city, looking for a camp a I never found, these two tents caught my eyes.
Similar to hundreds around, somehow I had to stop and look closely at the reflective fabric.

Serendipitously, Sean Davis, veteran burner / creator / designer of the tents came out one of them and started a conversation.
Thanks to a successful crowdfunding campaign he was able to manufacture his No Bake Tents with a double layer of heat reflection fabric topped by a vent to disperse rising warm air. 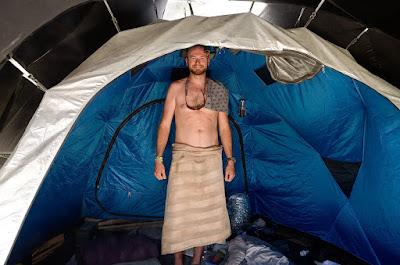 No Bake Tent Designer Sean Davis is a Tall burner and while that day the heat was oppressive, being inside the tent, in the afternoon, was instant relief. 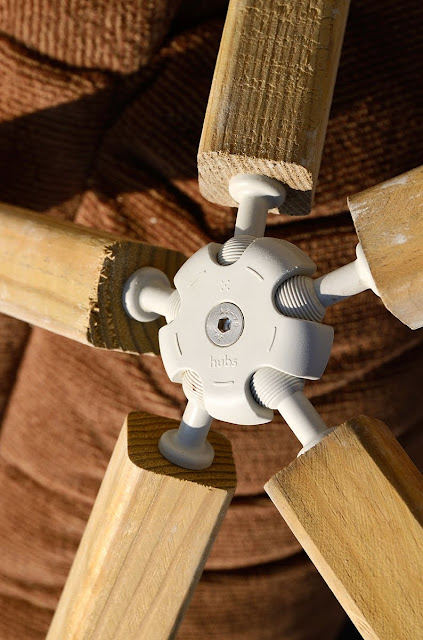 For participants looking to build a more organic dome with wood sticks, Chris Jordan, Mike Paisley and David Brickwood designed the easy to assemble Hubs connectors
It's fascinating to see the development of an idea from prototype to fully founded product, thanks to a successful Kickstarter campaign

This is a fun way to build rapidly, small 2V and 3V domes without going through the tedious metalworking associated with dome making. 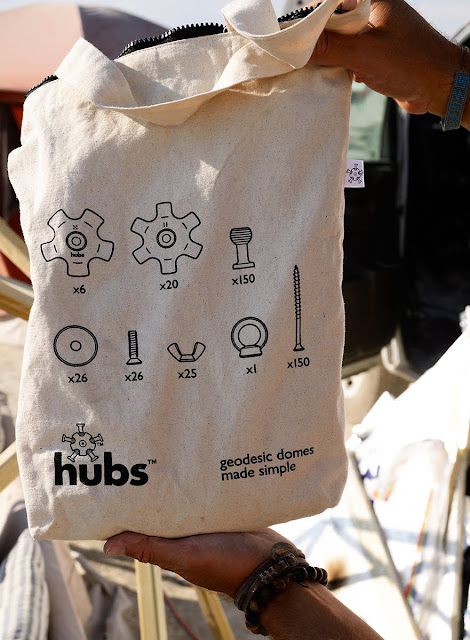 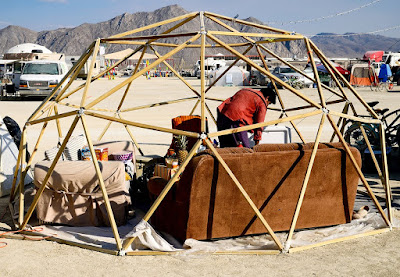 Dome made with Hubs connectors

In the spirit of bringing more info while doing research on the Hubs connectors,
we found the Geohubs connectors for domes made with pvc tubing


Disclaimer before torching this blog

As a photographer crisscrossing the city around the clock to document in earnest its colourful diversity, I meet participants coming from all walks of life enduring the same harsh environment of the desert in multiple fashions which is the essence of my work and makes it exciting.
My 14 faithful readers know that my goal is to give a vision of the city
as realistic as possible without restriction or prejudice
Also my friends and neighbours know the ultra-spartan living conditions in my camp, Déjà View, which is the opposite of the following camp
My purpose by featuring it is by no means to enable them let alone to make them the face of BRC

But when a camp brings a clearly defined good natured state of mind with the goal to build a sustainable and reusable structure that is aesthetic and effective, I must acknowledge it

Coming from Mexico, using 6-years-old bamboo grown in Chiapas with a clever system of plates and connectors designed in CAD, laser cut and also manufactured in Mexico, these structure were tested for 100 mph winds.

The project was led and manufactured by Javier Diaque (Causa.mx)
and designed in collaboration with Luisa Correa (Bambuterra),
Veronica Correa (Kaltia) and Xavier Hierro (Precoor) 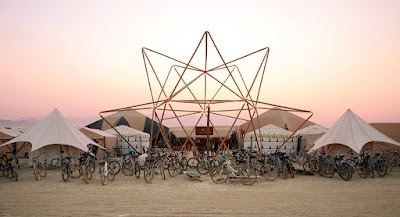 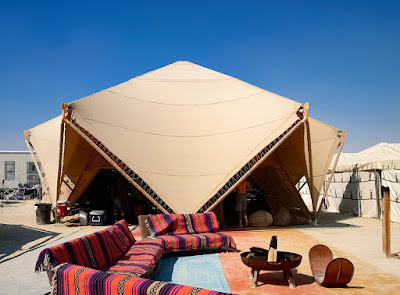 The chill Space structure is called by designer Javier Diaque, "Bichos" (bug or insect in Spanish) 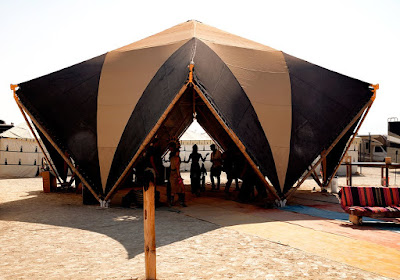 The other Bichos for the dance Space 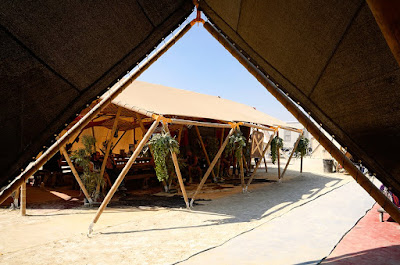 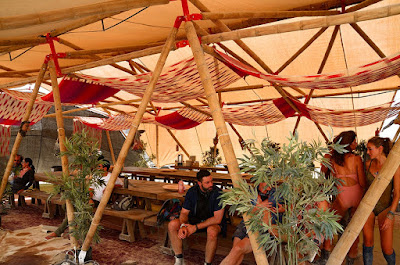 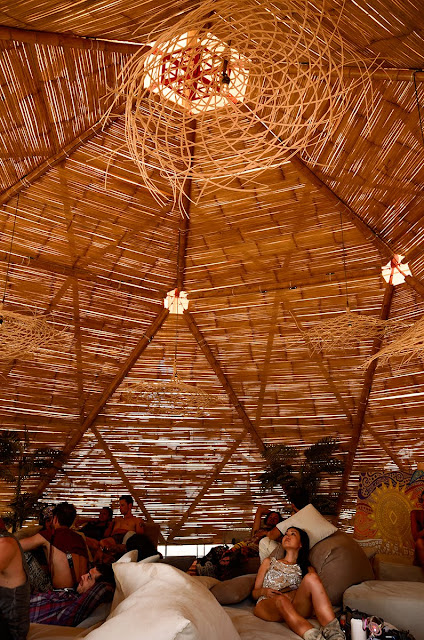 Inside the chill space, the hot air rises through the opening with the low frequency mandala keystone 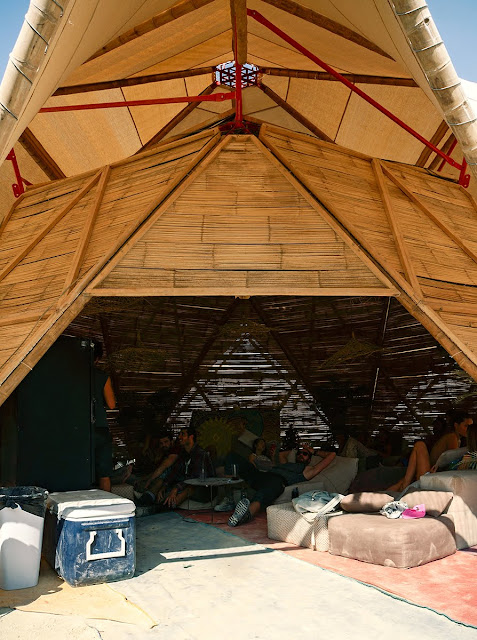 The Nest, chill space, is a two layered structure with a shade cloth fabric on top of an inner structure made of bamboo panels, it works! 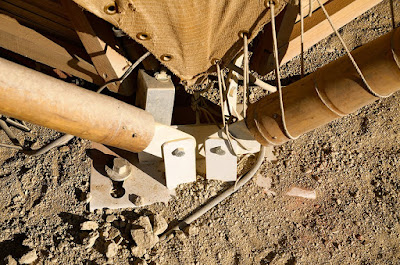 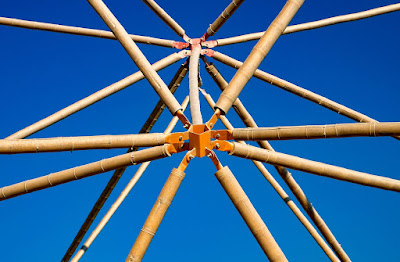 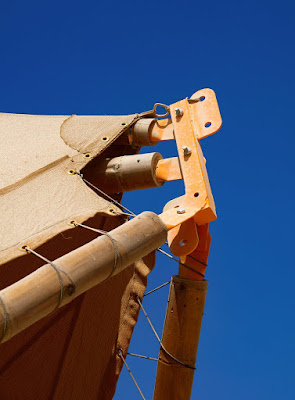 Philippe, Sextant is eternally grateful for the recognition you give us and all the others who go to the desert in search of something more than the rat race.

I myself am in an introspective period about how much of myself I have left to give. I think it's not a zero sum game. I am trying to find the identity for Sextant 2018. I know now that it can't be forced.

There's more yet to do, but a lot of it is off Playa. I think it's time to test the veracity of our community and see if it can contribute to the World.

Torrey
"Sarge"
Ever your even-keeled friend (at least part of that is true!)

I ran into you twice on playa in different years, as you were photographing my structures. This past year I did the structure you featured in your last post as “Anahasana Village Aluminet shade structure 2017”.
I enjoyed our talks, and really appreciated your take on architecture/construction - something that fascinates me as well. Each year you suggested that I go see one or two other projects, and I found all of those to be worthwhile suggestions. Thank you.
I’ll miss seeing you on the playa, and wish you the best!