Golden Rebar for the Quonset Domes of Camp Manifestation

Quonset Domes on the playa are usually covered with an unattractive metallic shiny grey tarp.
This colorful canopy caught my eyes from afar, soon talking with the designers, brothers Jed and Noah Zilberberg I realized that there was more that meets the eyes.

In the words of Jed Zilberberg:

What is unique is the method through which the structures are secured to the ground as well as the custom canopy coverings. We started with an idea to make the actual build of the domes as easy as possible. We wanted domes that could be fully constructed within a matter of just a couple of hours and that would create a cozy, fully openable or closable space, allowing for air flow on nice days or allowing for protection from dust storms as needed. 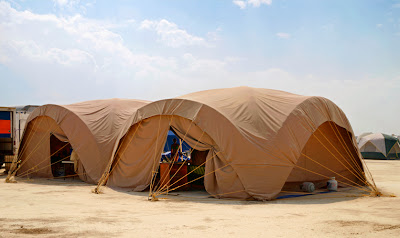 The canopy coverings were fully custom design, sewing all pieces (By the 2 Brothers!!) to fit these domes specifically. The over coverings were sewn to have a loose tailored fit and then cuffs were added along the edges to allow for the securing of the canopy from all sides via ropes to a single (or double for entry ways) tether point on each side. This created the effect of holding the structure down without a lot of tension and removed the need to have ropes running over the top of the canopies on the diagonals. There was no luff in the fabric because of the all-sides tie down. 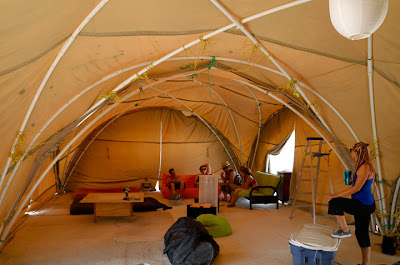 Custom made sinks with recycled totes and running water. 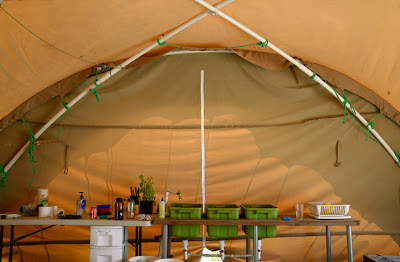 The most important part of having an easily erectable structure is the structure footing design. We needed a footing model that did not require pounding many pieces of straight rebar.

So, the solution was to fabricate feet that were self-contained.

Each footing point of each dome (the 4 corners of each dome) requires 5 spikes on which the PVC poles sit. Instead of having 5 individual pieces of rebar we designed a steel plate that had the 5 spikes attached.
We realized that these spikes should be removable so they had to be bolted on the plate instead of welded on.

Each spike was fabricated from scratch, welding supporting braces on to each side of the mounting bracket that then gets bolted to the foot plate.
The result is a fully portable and modular footing plate.
Each complete plate has 2 holes on either side through which 2 pieces of bent rebar staples are placed and used to secure the plate to the ground.

The ultimate result of this design is that, for 2 domes, instead of having 40 pieces of straight rebar to pound in and take out, we have 16 pieces of bent rebar. The bent rebar are much easier to remove and clearly the number reduction saves on the work load as well. 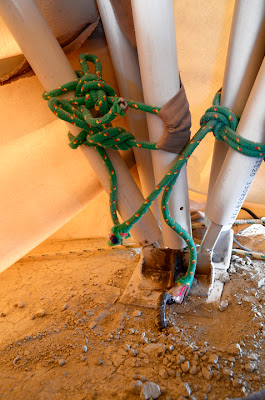 The canopy sides were sewn to be modular and to be allowed to be opened at any side. Large marine zippers were used to allow for good head clearance and provide sturdy usage for opening and closing. Tie backs were sewn on so that when zipped open the flaps could be held back so that there is a door way created or a space for air flow. 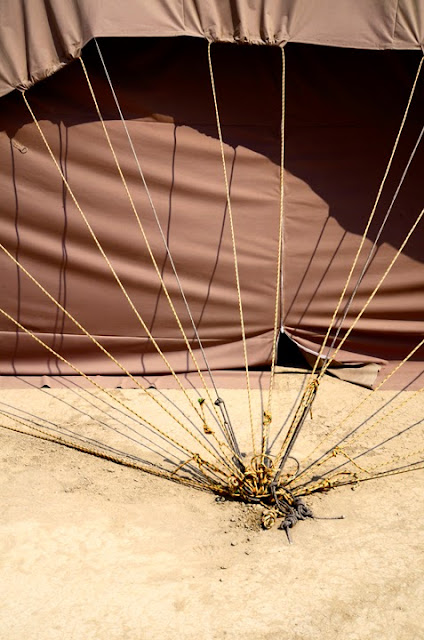